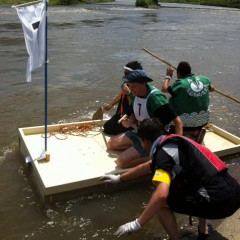 Ever since moving to Togura-Kamiyamada 6-1/2 years ago, I heard stories of my elders in the ryokan association and chamber of commerce about rafting events on the Chikuma River. Their eyes would glaze over as they thought about all the fond memories of floating down the river. Unfortunately, a series of difficulties caused the event to be canceled long before I came on the scene.

Luckily, though, last year a bunch of old-timers started up the rafting event again, and this year, the ryokan junior association members got to borrow a raft and participate. So on the 19th, myself and two other junior innkeepers rode our loaner raft from the fountain park here in our onsen town Togura-Kamiyamada to Chikuma Bridge, about an hour and 10-minute float.

I'm used to just driving or taking the train through town. The view from the river is totally different. The gentle flow of the Chikuma River, the lush river bank, the green mountains surrounding all sides -- you really realize how blessed with nature Chikuma City is. And floating down the river is a lot of fun, too!

Hopefully the event will get bigger and bigger every year, so more people can experience the joy of rafting down the Chikuma. And our eyes can glaze over, too, with the fond memories. 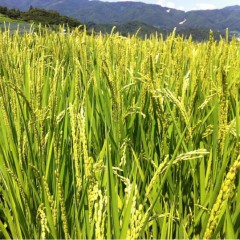 As the Obon holiday is finished, it feels like we have passed the peak of summer. There is a faint coolness on the wind now when it blows. And another sign: The famous moon-reflecting terraced rice fields of Obasute had been a deep green color; now the rice fronds have started to appear. The fields have turned a golden shade of yellow-green.

After the O-Bon,
A touch of cool on the wind
Rice fields turn golden 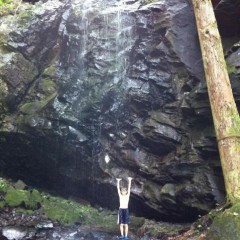 This summer has been an extraordinarily hot one. So, how to beat the heat? By taking a waterfall shower!

This past spring, the boys and I had scouted out Kuro Falls on the northern flanks of Kamuriki Mountain. On one of these hot August summer days, the boys and I went back, and this time enjoyed a refreshingly cold shower. 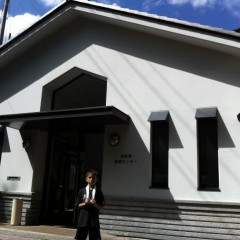 In my research of Nagano's Top 100 Onsens, the latest one I went to is Kakeyu Onsen. I've been to Kakeyu many times, but this time I wanted to check out the main public bath, Monju no Yu.

First, a bit of background on Kakeyu Onsen. The name means 'The onsen that a deer revealed'. According to legend, a particularly religious local hunter went to the mountains to try to find some game. He wasn't having luck finding any animals, and ended up walking deeper and deeper into the mountains. As he was about to give up and return, he spotted a deer grazing. He took up his bow and shot an arrow that hit the deer in its back. The deer ran off with the arrow still attached. As fast as the hunter chased, he couldn't keep up with the deer. Since it was getting dark, he decided to return home. The next day, he searched the area where he encountered the deer but to no avail. As he was about to go back home, he saw the deer bathing in a pool of water, apparently fully healed. Just then, Monju Bosatsu (the bodishattva of wisdom) appeared. "In recognition of your fervent belief, I am revealing the location of this onsen to you. Share it with everybody."

In Kakeyu Onsen, there is a temple dedicated to Monju Bosatsu (said to be one of the top three of such temples in Japan), and the main public bath is named Monju no Yu, in honor of the diety.

Monju no Yu is the current configuration of Kakeyu's O-Yu main bath. Historically, none of the inns had their own baths. Residents and visitors alike would come to the O-Yu to bathe. Nowadays, the 22 current inns and hotels have their own onsen baths, and many residences have soaking baths and/or showers. Yet even today, it is common to get a change of scenery and try another onsen bath, hence the popularity of Monju no Yu.

Located next to the original spot where onsen water first came to the surface (some 1200 years ago), the current Monju no Yu bathing facilities were built relatively recently (1990's?). The location overlooks the Uchimura River and is adjacent to Godaikyo, Kakeyu's symbolic wooden covered bridge that leads to the Monju Bosatsu temple. It's a picture-perfect location, and so tranquil. Walking down the lane from Kakeyu's main street to the river, it's like a different world, one that time left behind and that belongs to nature with the shady wooded valley and gurgling stream below. It was easily 5 degrees cooler down by the bridge and bathhouse than up on the main street.

Also, a little more bit of background on Kakeyu Onsen. It is the home to Kakeyu Hospital which specializes in rehabilitation, taking advantage of the rejunivate power of the onsen water. In fact, a majority of the guests to Kakeyu come for extended stays (called 'Touji' in Japanese) -- to recuperate after an operation, to rest up in the farming off-season, to take time to write a book, etc. The relatively cool (38-40 deg C) temperature of the onsen water lends itself to long, leisurely soaks. And the town is fairly compact with just the degree of hills to make going for a stroll a bit of good exercise. Several of the inns offer "Ji-sui" where guests cook for themselves during their long stay.

Along with nearby Reisen-ji Onsen and Oshio Onsen, Kakeyu is a designated National Recuperative Onsen District. The mineral content of the onsen water is considered to be so good for your body when taken internally (i.e. for drinking) that Kakeyu was selected as the Ozeki (top in sumo ranks) of Eastern Japan.

With its legendary origins, history and rejuvinative waters, I wanted to give Kakeyu Onsen's Monju no Yu a try. And, so, does it make Tyler's Top 100 Onsens of Nagano list?

If one (any one at all) of the showers had more than just a trickle,
if the baths had even just a small water spout (I don't care if the baths have to be recirculated -- have some of the water enter the bath from a spout; that is one of the essential things that make an onsen an onsen!)
if the outdoor bath had more than just a peek-a-boo view of the Uchimura River and the iconic Godaikyo bridge,

So, Kakeyu Onsen is definitely one of Nagano's more important onsen districts -- I just suggest not limiting yourself to the official public bath Monju no Yu; Try a bath in one of the hotels, too. And you can't go wrong with Saito Hotel. Their outdoor bath features an exquisite garden. 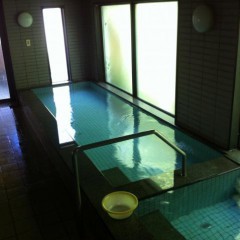 Monju no Yu's indoor bath (not a single shower had more than a trickle!) 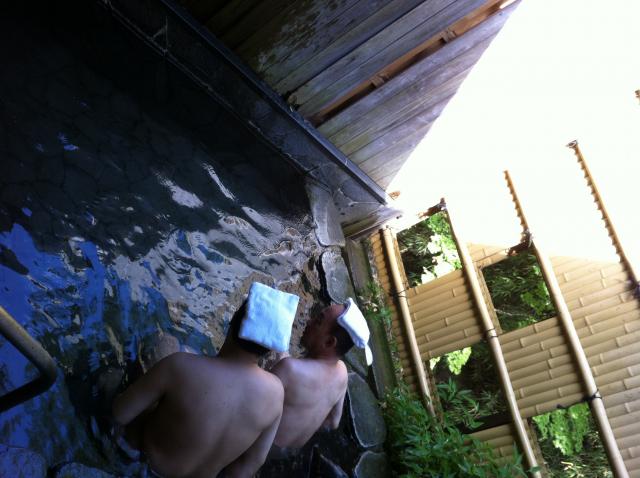 The outdoor bath and the peek-a-boo view (in the plastic bamboo -- uggh!) 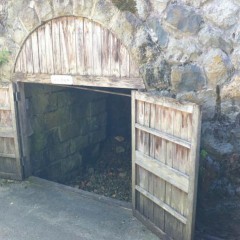 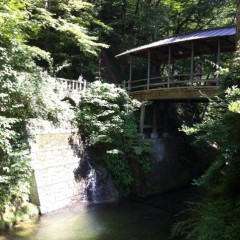 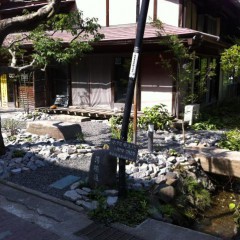 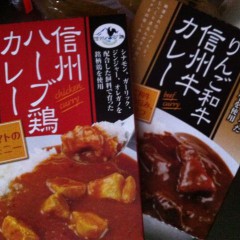 I am a bit embarassed to admit, but I am a fan of Japanese microwavable curry. You just open the pack, microwave it for a couple of minutes, and voila! Yummy curry for lunch. It's inexpensive, fast, fills you up, tastes good, and it's so easy. Just don't ask how healthy it is...

Anyways, my personal favorite is curry by SB. Their factory is in nearby Ueda City. Everytime I drive by it, the tantalizing scent comes wafting my way.

The other day, I went shopping at a local supermarket and saw 2 types of microwave curry that I'd never seen before: Shinshu Wagyu Curry and Shinshu Herb Chicken Curry. 'Shinshu' is the classic name for Nagano, and the Wagyu and Herb Chicken are 2 made-in-Nagano products that the prefecture is hoping to promote. Nagano's Wagyu is from cows that are fed Nagano's apples, so has a hint of fruity sweetness. The Herb Chicken is free-range and has a highly regarded taste.

Increasing the presence of Nagano's gourmet products via incorporating them into these curries is certainly a novel idea. And does the taste hold up to the hype? That is yet to be seen! 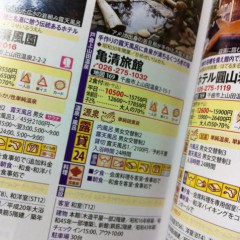 We here at Kamesei are excited -- we got listed in the Mapple "Onsen & Inn" guide's Tokyo & vicinity version. The guide is a catalog of 240 onsen areas and 1,420 inns and hotels.

Kamesei has never had the honor of being listed before. I think it is due to our adding a family bath that we got picked for the 2013 edition. Kamesei Ryokan has finally joined the Mapple ranks!

My excitement is modified, however, with the realization that there are 1,419 other onsen inns also listed in the guide. How are readers ever going to find us? But at least now we are officially in the guide! Thank you, Mapple! 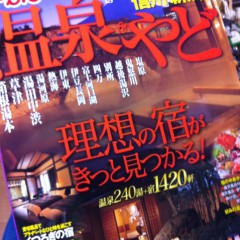 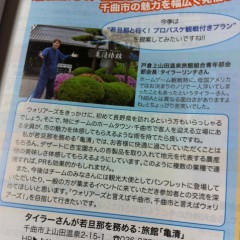 The latest issue focuses on the supporters. In particular, Takamatsu-san and Usui-san of apricot orchard Kyohouen. Besides growing delicious apricots and producing all kinds of new products, he two ladies also happen to be huge hoops fans. In addition to those two, the article also mentioned a local innkeeper who uses Kyohouen's products and who also happens to be a huge Warriors fan.

Which is how I happen to have been featured in an apartment rental magazine's pro hoops team article with a couple of apricot growers! 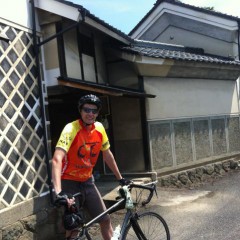 Depart our onsen town Togura-Kamiyamada,
Ride the bicycle path along the Chikuma River to the Inariyama historical district,
Ooh and Aah over the classic earthen-walled storehouses and wander the narrow alleys,
Stop for lunch at okonomiyaki restaurant Silky,
Then ride back along the bike path enjoying the beautiful river valley and the scenic mountains on either side.

That's my favority bicycle course. We briefly hosted an exchange student from Belgium and I took him with me for a ride to Inariyama. Me on my road bike, he on one of our town's rental cycles.

I really enjoyed seeing the old warehouses, but the exchange student liked seeing the various gardens more. Hmm, everyone has their own parts of Inariyama they enjoy.

Here at Kamesei Ryokan, we have rental cycles as well as a cycling map (including the Inariyama course) for your enjoyment. 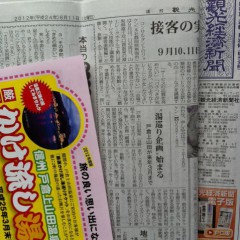 Last month, I took the shinkansen into Tokyo with other members of the Togura-Kamiyamada Ryokan Association for a media blitz. During that 'caravan', I stopped at the offices of the Kanko Keizai (Tourism Economics) Newspaper and explained about our onsen town's new onsen-hopping plan.
In the August 11th issue of the newspaper, they included an article about Togura-Kamiyamada's new plan. I was thrilled to see it got such thorough coverage. Hopefully everyone in the industry will be aware of it now and more guests will enjoy the onsen-hopping pass.

My job as an innkeeper is more than just flipping futons -- it also means promoting the overall town like this. 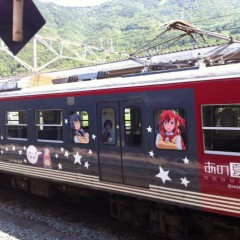 For all of you anime 'otaku' out there, here's some good news: One of our local Shinano Railway's cars has become an anime train.

Komoro City, one of the main stops along the line, was made the setting for an anime called "Ano natsu de matte iru", or, "Waiting at that summer". The train is 'wrapped' in images of the main characters from the anime.

The special anime train will be running until the end of August. So don't miss this chance to see the anime train!