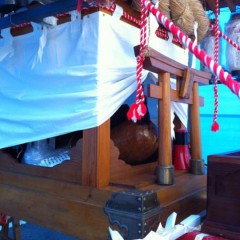 Preparations for this weekend's onsen summer festival are reaching a feverish pitch. Starting this year, I switched from the giant shi-shi lion group to the omikoshi group.

For those of you not familiar with 'matsuri' (Japanese festivals), an 'omikoshi' is basically a portable version of an area's local shrine. It is carried around town, stopping at various places for a special blessing.

Wrong! This is more X-Games material than some quaint cultural feature from National Geographic.

The omikoshi weighs upwards of a ton and is carried on the shoulders of 40, 50 even more people depending on its size. They usually process around town in a somewhat controlled manner. But when they return to the main festival site for the grand finale, all controls are cut loose. Multiple omikoshi are in action -- they taunt each other and often crash into each other, sometimes crushing the people carrying them. When the omikoshi spins around, the momentum sometimes gets going so fast, especially around the corners, that the carriers can easily fall and get trampled. That's not to mention the omikoshi getting out of control and crashing into the audience.

All of this is set to a rythmic chant of 'wasshoi', from the carriers, the handlers, the people watching, the taiko drummers encouraging everyone, and the ladies standing on top of the omikoshi urging the carriers on.

But before the wasshoi, there is the final preparation for the omikoshi, which I'm doing today. Here's looking forward to the festival!