How to get to or from Kamesei Ryokan here in our onsen town Togura-Kamiyamada and Jigokudani Wild Monkey Park (world-famous Snow Monkeys) as well as Togakushi (massive cedar trees, superb soba noodles and ... ninja!) for 2017 spring/summer/fall.  (Will be updated for 2017/18 winter once the new train / bus schedules are announced.) 亀清旅館（戸倉上山田温泉）と地獄谷野猿公苑及び戸隠との間の交通機関の時刻表を作ってみました。2017年のグリーンシーズンの分です。

Jigokudani Wild Monkey Park is located at the end of a 30-minute walk along a scenic forest trail.  The trailhead is at Kanbayashi, just up the road from the Shibu-Yudanaka onsen resort area.  Access from Nagano Station to Kanbayashi is one of two ways:  1) Express Bus bound for the Shiga Kogen mountains to the "Snow Monkey Park" stop (NOTE:  the bus stop is 30 minutes on foot from the actual park on the aforementioned trail) or 2) Nagaden Train to Yudanaka Station, change to local bus to either Kanbayashi Onsen stop (bus bound for Kanbayashi) or Snow Monkey Park stop (bus bound for Shiga Kogen).  The Express Bus and Nagaden Train depart opposite sides of Nagano Station -- Express Bus from the East Exit side, platform #23; the Nagaden Train starts out as a subway on the Zenkoji Exit side.  The Snow Monkey 1-Day Pass covers trains/buses from Nagano Station to Kanbayashi as well as the park entrance fee.  It saves a bit of money, but more importantly, saves the hassle of figuring out how/when/where to pay.  It is only sold at the Nagaden Train ticket office, so if you take the Express Bus, make sure you allow time to buy the pass on the Zenkoji Exit side before crossing the station to the bus platform on the East Exit side.  The schedule below covers the more convenient options in conjunction with connecting Shinano Railway trains to/from Togura, and is not a complete schedule. 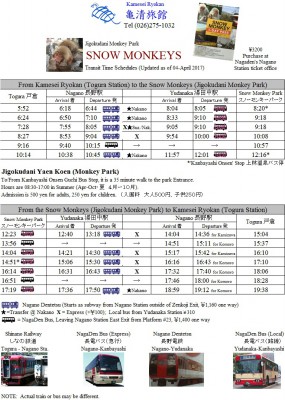 Buses run from Nagano Station to Togakushi approximately once per hour.  They depart from Bus Stop #7 which is located in front of the Alpico Bus office across the street from Nagano Station's Zenkoji Exit.  Below schedule matches up those buses with connecting Shinano Railway trains to/from Togura Station. 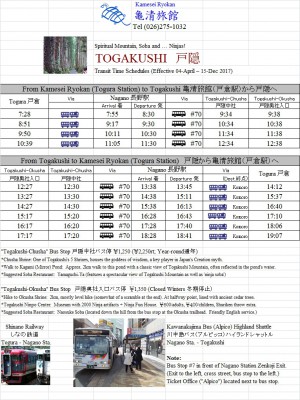