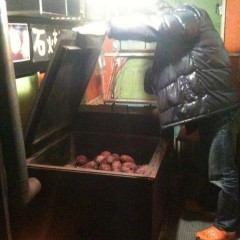 Last night, I was chatting in our lobby with Eric, a guest from New York City. He was talking about some of the culture shock he's had since coming to Japan. "Japanese people are so polite!" and "Even though there aren't any garbage cans anywhere, there is hardly any litter around!" Well, compared to New Yorkers, pretty much anybody is going to look 'polite'. But I have to say, one thing I am always impressed by is that back in the States, if a waiter or shop staff is being friendly, it's often because they are hoping for a tip. In Japan, the politeness is authentic. And Eric was spot-on with his garbage observation. In the States, despite there being trash cans on practically every corner, a lot of people still litter. How can the cultures be so different?

Anyways, as we were rambling on about the cultural variety, from the street we heard the "Ya~ki imo~" chant from the 'yaki-imo' vendor. I have become accustomed to hearing his song, but Eric on the hand stopped and said, "Hey, what's that?" I explained it was a vendor that cooks yam-type potatoes in the back of his truck and drives around our onsen town in the winter selling them. Eric said, "So, it's the Yam Man?"

Needless to say, the two of us ran outside and chased down the Yam Man for some hot baked yams. My first of the season, it was pretty darn good! 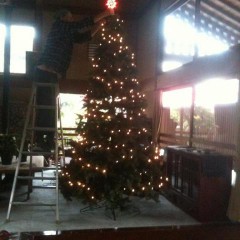 It's less than a month now until Christmas. Our kids have already started the countdown. They are looking forward to Santa Claus coming. Yesterday we put up our Christmas Tree in Kamesei's lobby. Actually, this year the kids did most of the decorating as Mom and I had to leave to pick up some guests. We've collected quite an assortment of ornaments over the 15 years that we've been married. Now our collection is on display in our inn's lobby, so we can share the Christmas Joy with our guests. 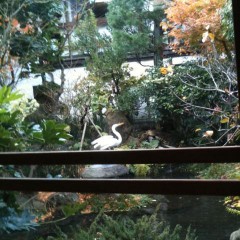 This white heron came to our naka-niwa inner garden here at Kamesei Ryokan. He probably flew in from the Chikuma River. Perched on our Zenkoji andon lantern, he stared at the koi in our pond. Doesn't he know that our chef's breakfasts taste better?

In Chikuma City's Kuwabara district, along the old Zenkoji Kaido road that still has some resemblance of its time as a waystation on the old road to the big Zenkoji in Nagano City, is Kaigan-ji Temple. Kaigan-ji has a zazen room, and every once in a while I go there for 5am Zazen meditation. This morning, I took both of our sons. After the meditation, we went inside the temple's main building, and were startled to see a huge 2.1 x 2.7 meter painting of a dragon on the wall.

It turns out Kaigan-ji is presenting a special display of one of the test paintings for the even larger one made for Kenchou-ji Temple in Kamakura in celebration of the 750th anniversary of that temple's founding. This 'Unryu-zu' (dragon ceiling painting) was made by Mr. Koizumi Junsaku, Japan's premier painter of unryu-zu.

According to the explanatory literature, Kenchou-ji is like the grand-daddy of Buddhist temples in Eastern Japan. It is on par with the major Kyoto temples of Daitoku-ji, Myoshin-ji, Toufuku-ji, Shokoku-ji and Nanzen-ji. All of those temples have 'unryu-zu' paintings of dragons on the ceilings. Kenchou-ji never had one, so in honor of its 750th birthday the temple called on Koizumi-san.

Koizumi-san went to Kyoto and made the rounds to study the dragon paintings there. The one that most impressed him was Daitoku-ji's. While the others were painted directly on to the ceiling panels, Daitoku-ji's was a watercolor drawn on paper using sumi ink. The finished painting was then applied to the ceiling.

For Kenchou-ji's unryu-zu painting, Koizumi-san decided to use that technique. But first, he had to make a 'shoshita-zu' test version to get the scale and balance right. The painting on display here at Kaigan-ji is that shosita-zu. Despite being a 'test', it is a masterpiece in and of its own right, with a size that is nothing but impressive. You can get the full effect of the dragon's strength and vitality as it seems to jump right out of the painting towards you.

Kaigan-ji's display of Koizumi-san's work is a unique chance to see a painting of this magnitude so close. The temple is a short 15 minute drive from Kamesei. Perhaps we could go and see it together the next time we go for 5am zazen. 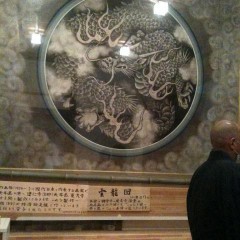 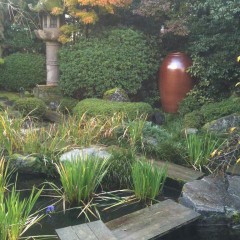 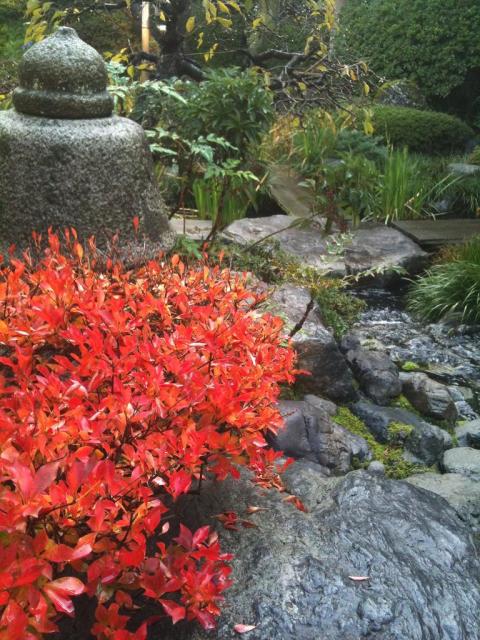 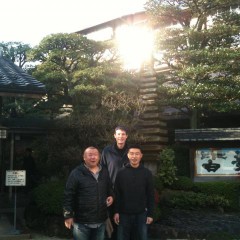 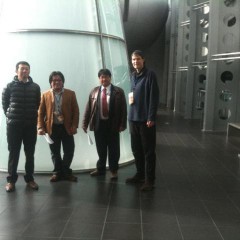 My fellow research group members at the convention hall

Today I am Shimane Prefecture for the once-every-two-years Ryokan Junior Association's national convention. Approximately 800 junior innkeepers from throughout the country are gathering here in Matsue City. For these past two years, I have been participating in a research committee, and today is when we make our presentation in front of everybody.
Here are some scenes of the big event.

NOTE: Pictures below are courtesy of pro cameraman "Ishi"-san. 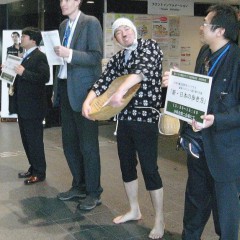 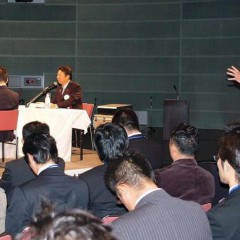 Giving my 2 cents at the main Discussion 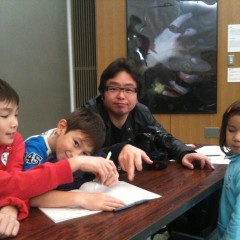 The kids posing with Kakizaki-san

I took our kids to go see Chikuma Art Council's "Art Now! 2010" show. A few of the artists themselves were present, making the show that much more meaningful as we could see the faces behind the creations.

Our kids especially liked meeting Kakizaki-san and seeing the video of his modern flower art / dance choreography in Sweden.

For me, it was an honor to once again meet Kondo Shiro-san, the organizer of the art show. I am hoping they hold another show here in our onsen town, Togura Kamiyamada! 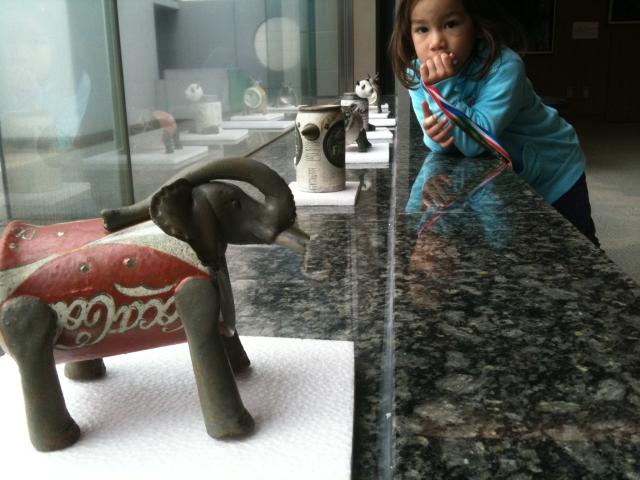 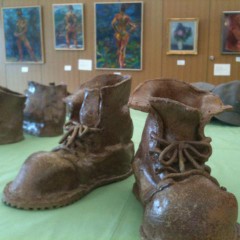 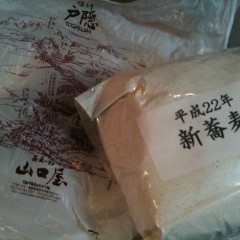 The wine world has its Beaujolais nouveau. In the world of soba noodles, we have "Shin" (New) Soba.

Togakushi, northern Nagano's soba mecca, is abuzz with excitement over this year's new crop buckwheat. I got my hands on some of the new buckwheat flour for the next time I make cookies.

Here at Kamesei Ryokan, we serve some home-made cookies for the tea sweets. I bake the oatmeal cookies using my mom's recipe. And, by adding a touch of local soba flour, the cookies become a mix of the best of both the east and the west! And now, even better with new crop soba flour! When I woke up this morning and looked outside, I was treated to a beautiful red sky as the sunrise was colorfully lighting up the clouds.

However, soon afterwards, it started to rain. Today ended up being a cold, rainy day. Those sailors sure knew their weather symbols -- it's amazing their saying works even here in ocean-less Nagano. 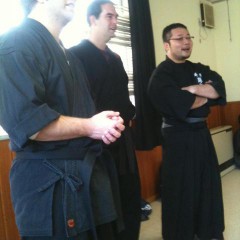 The world of ninjas is inherently secretive, but it is generally accepted that Iga-ryu in modern-day Mie Prefecture and Togakure-ryu, a style that branched off 800 years ago, are historically the two main styles of ninjutsu. The mountains of present-day Togakushi, the highlands above Zenkoji Temple / Nagano City, historically provided the seclusion for the Togakure-ryu ninjutsu training. The current grandmaster, Masaaki Hatsumi, lives in Chiba, and on his birthday (02-December), martial arts enthusiasts from throughout the world gather to celebrate.

Some of Hatsumi-sensei's disciples continue the Togakure-ryu ninjutsu tradition in Togakushi, partly out of an interest in martial arts training, partly out of a desire to continue the tradition. I have been working with this group to make their weekly 'o-keiko' (practices) formally open to participation by people curious about ninjas. Informally, they welcome outsiders to participate in the lessons as they appreciate the interest and enjoy sharing their enthusiasm for ninjutsu.

Miyashita-san, one of the group's members that lives down in center Nagano City, offers ninjutsu lessons every Saturday morning at a community center near Zenkoji Temple. Yesterday, the Nagano Inbound Summit gang and I met the regular members of Miyashita-san's ninja workout and discussed ideas for taking his lessons to the public.

I will be putting the information together shortly for adding to the unique-nagano.com website -- stay tuned!